Learn more about endometriosis, its common symptoms, and how it is treated.

Endometriosis is one of the most common gynecological disorders, affecting approximately 10% of all women in their childbearing years2,3

It's not clear why endometriosis occurs, but we can help you understand what happens in your body. Endometriosis occurs when the endometrial lining normally found inside the uterus begins to grow outside the uterus. These growths are called lesions. They may grow on the ovaries, fallopian tubes, or other areas near the uterus. The lesions can bleed and break down each cycle, causing scar tissue and adhesions (scarring that binds tissues together).2,4

Where can endometriosis occur?2,4 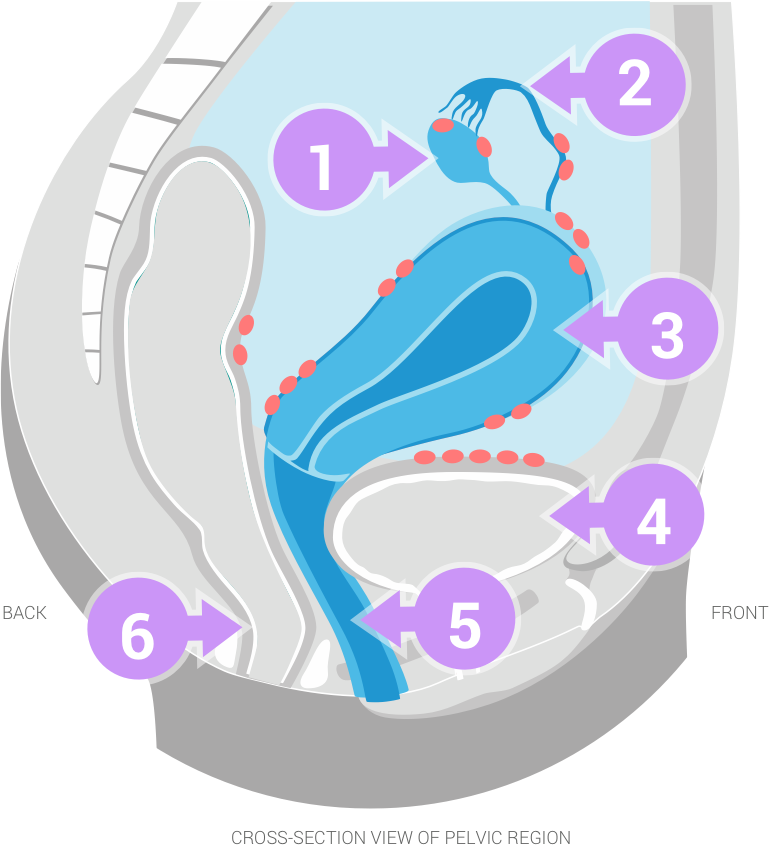 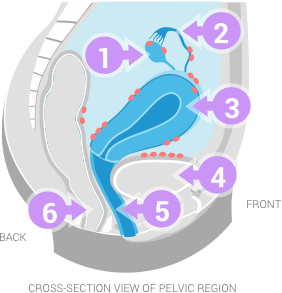 Endometrial tissue builds up in the uterus every cycle, but when it grows outside the uterus, it can cause painful symptoms4

These events can cause painful endometriosis symptoms, such as4,5:

Many women with endometriosis have no symptoms.4

Hormones, including estrogen, are released by the ovaries.

Endometrial tissue growth can lead to painful symptoms and scarring.

Patients with endometriosis may have a surgery called a laparoscopy to diagnose and/or treat their endometriosis. This procedure enables your doctor to examine the condition of the patient's reproductive organs and look for locations of endometriotic lesions. The doctor may also take a tissue sample called a biopsy to confirm the diagnosis.2

Many women who have endometriosis initially go to their doctors because of chronic pelvic pain. Your doctor may initially prescribe medications such as contraceptives (OCs) or nonsteroidal anti-inflammatory drugs (NSAIDs) to treat that pelvic pain after ruling out other causes, such as infections.4,5,8

After confirming a diagnosis of endometriosis, your doctor may decide that a gonadotropin-releasing hormone agonist (GnRHa) medication such as LUPRON DEPOT may help relieve your pain.1,5

What is LUPRON DEPOT?

LUPRON DEPOT offers 2 different dosing options for treatment, both of which can be combined with Add-back* therapy from day 1 in appropriate patients1:

How does LUPRON DEPOT work?

LUPRON DEPOT suppresses the hormones that cause endometrial tissue to grow.1

LUPRON DEPOT therapy suppresses the signals from the pituitary gland in the brain to the ovaries, which stimulate estrogen production.1 By doing this, LUPRON DEPOT injections also suppress the hormones that cause endometriosis to grow. Suppressing the hormones helps1,4:

What can you expect during a 6-month course of LUPRON DEPOT therapy?1,5,10 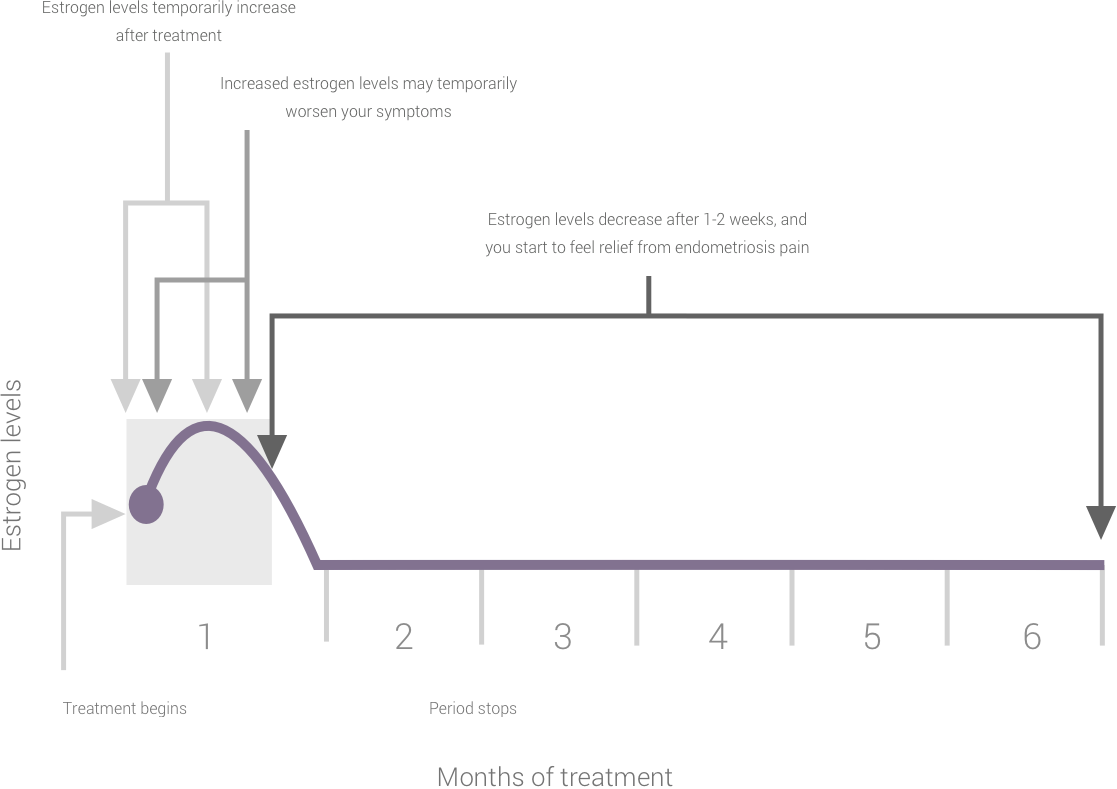 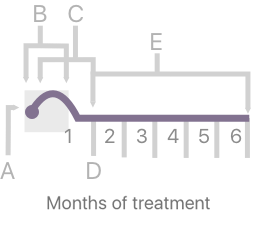 For illustrative purposes only. Responses may vary in individual patients.

Things to keep in mind

LUPRON DEPOT is not a method of birth control. Even though you may not have a period, unprotected intercourse could result in pregnancy. You should use non-hormonal birth control such as condoms, a diaphragm with contraceptive jelly, or a copper IUD to prevent pregnancy. Contact your doctor immediately if you think you may be pregnant.1

Who should not take LUPRON DEPOT?

You should not receive LUPRON DEPOT if you1:

You should not receive Add-back* plus LUPRON DEPOT if you have or have had any of the following conditions1:

More detailed information about the study

One hundred and twenty-five patients from two 6-month, double-blind, randomized clinical studies entered a 1-year follow-up study. This study grouped patients who received 3.75 mg LUPRON DEPOT during previous trials and assessed recurrence of endometriosis signs and symptoms and safety parameters after discontinuation of treatment. The primary endometriosis signs and symptoms assessed were dysmenorrhea (painful periods), non-menstrual pelvic pain (NMPP) (pain in the pelvic area before or after periods), dyspareunia (pain during sex), pelvic tenderness (pain during the pelvic examination), and induration (hardening of pelvic tissues). The first day of the study was considered to be 29 days after the final study injection. Return of pain was defined to have occurred during the month for which pain levels returned to baseline (prior to treatment) levels or worse. At each study visit, an evaluation was made of dysmenorrhea, NMPP, and dyspareunia by patient interview. Pelvic tenderness and induration were evaluated by pelvic examination.12

Percent of women who FOUND RELIEF within 30 days of completing treatment with LUPRON DEPOT
(6 months of therapy)1,11

Percent of women who FOUND RELIEF 12 months after completing treatment with LUPRON DEPOT
(6 months of therapy)1,11

In clinical trials, the most common side effects of LUPRON DEPOT, occurring in >10% of patients, include hot flashes/sweats, headache/migraine, decreased libido, depression/emotional lability, dizziness, nausea/vomiting, pain, vaginitis, and weight gain.1

About Add-back* therapy and side effects

When LUPRON DEPOT is used alone, bone thinning and hot flashes can occur. Along with LUPRON DEPOT injections, your doctor may prescribe Add-back* therapy. Add-back* is a daily pill that you take while on LUPRON DEPOT therapy to add back a small amount of the hormone progestin, which can help you manage certain side effects, without interfering with the way LUPRON DEPOT works.1,5

Add-back* may be prescribed from Day 1 of initial treatment with LUPRON DEPOT. Add-back* is not for everyone and should not be taken by women who currently have or have had any clotting disorder, heart disease, stroke, impaired liver function or liver disease, or breast cancer.1
Click here to learn how to save on Add-back* therapy.

What can you expect after discontinuing LUPRON DEPOT?

Learn about LUPRON DEPOT for endometriosis. 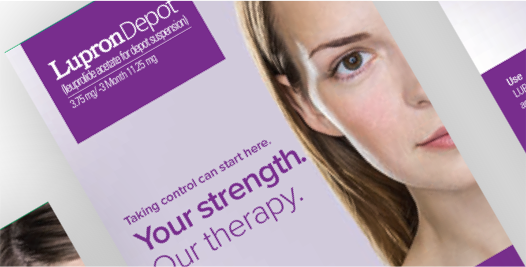 Learn how you can save on your LUPRON DEPOT prescription.

Taking LUPRON DEPOT Alone
LUPRON DEPOT® (leuprolide acetate for depot suspension) 3.75 mg or 11.25 mg is used for the management of endometriosis, including pain relief and reduction of endometriotic lesions.

Limitations of Use
The total duration of therapy with LUPRON DEPOT 3.75 mg or 11.25 mg plus add-back therapy should not exceed 12 months due to concerns of bone thinning.

LUPRON DEPOT 3.75 mg or 11.25 mg with iron therapy is used before fibroid surgery to improve anemia due to vaginal bleeding from fibroids for patients in whom 3 months of hormonal suppression is deemed necessary. The duration of therapy with LUPRON DEPOT is limited to 3 months. The symptoms associated with fibroids will return after stopping therapy.

Your doctor may consider a 1-month trial of iron alone, as some women will respond to iron alone. LUPRON DEPOT 3.75 mg or 11.25 mg may be added if the response to iron alone is considered inadequate.

Limitations of Use
LUPRON DEPOT 3.75 mg or 11.25 mg is not used in combination with norethindrone acetate add-back therapy before fibroid surgery to improve anemia due to vaginal bleeding from fibroids.

This is the most important information to know about LUPRON DEPOT. For more information, talk to your doctor or healthcare provider.

If you are having difficulty paying for your medicine, AbbVie may be able to help. Visit AbbVie.com/myAbbVieAssist to learn more.

Monotherapy
LUPRON DEPOT® (leuprolide acetate for depot suspension) 3.75 mg or 11.25 mg is indicated for management of endometriosis, including pain relief and reduction of endometriotic lesions.

Limitations of Use:
The total duration of therapy with LUPRON DEPOT 3.75 mg or 11.25 mg plus add-back therapy should not exceed 12 months due to concerns about adverse impact on bone mineral density.

LUPRON DEPOT 3.75 mg or 11.25 mg used concomitantly with iron therapy is indicated for the preoperative hematologic improvement of women with anemia caused by fibroids for whom three months of hormonal suppression is deemed necessary.

Consider a one-month trial period on iron alone, as some women will respond to iron alone. LUPRON DEPOT 3.75 mg or 11.25 mg may be added if the response to iron alone is considered inadequate.

Limitations of Use:
LUPRON DEPOT 3.75 mg or 11.25 mg is not indicated for combination use with norethindrone acetate add-back therapy for the preoperative hematologic improvement of women with anemia caused by heavy menstrual bleeding due to fibroids.

You are leaving LUPRON DEPOT (leuprolide acetate for depot suspension)

The "Continue" link below will take you out of LUPRON DEPOT (leuprolide acetate for depot suspension) Website operated by AbbVie Inc.

You are leaving the LupronGyn.com website and connecting to a site that is not under the control of AbbVie. AbbVie is not responsible for the contents of any such site or any further links from such site. AbbVie is providing these links to you only as a convenience and the inclusion of any link does not imply the endorsement of the linked site by AbbVie. You should also be aware that the linked site may be governed by its own set of terms and conditions and privacy policy for which AbbVie has no responsibility.

You are about to view a resource that is for US healthcare professionals only.

You are about to view a resource that is for US healthcare professionals only.